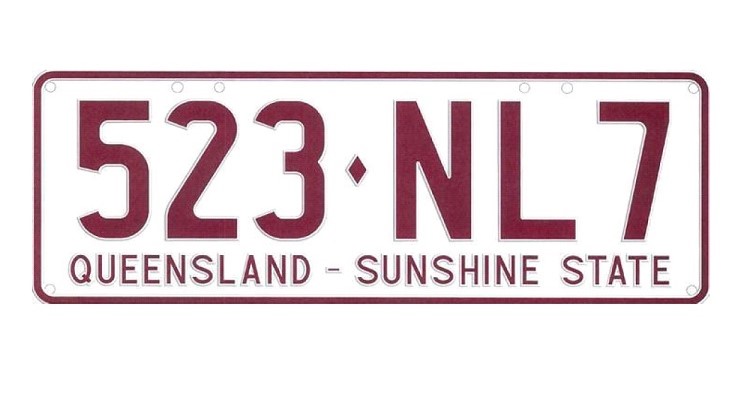 Queensland’s current number plate series, which features three numbers followed by three letters, is coming to an end after 40 years and the new series is expected to begin appearing on Queensland vehicles in either late August or early September 2020.The new plates will continue to use maroon characters on a white background and the slogan, QUEENSLAND – SUNSHINE STATE, will also be retained. The plates will feature three numbers followed by two letters and then a further number – for example, 523-NL7 (see example above).

As that series is used up, the number at the end will cascade back so that it appears between the letters (523-N7L) and, when that series is exhausted, the final number will move to the start of the last three characters (523-7NL).

The numbers 0 and 1 will not be used in the final three characters on the new series to avoid any misreading of those numbers as letters by camera detection devices, enforcement officers or the general public.

The new series will provide Queensland with more than 16 million new combinations which should, dependent on the rate of new vehicle registrations, last more than 25 years.

The new plates will incorporate directional security marks which will be the letters ‘QLD’ enclosed within a circle. The marks are invisible when viewed from directly in front but can be seen, both during the day and at night, when viewed from certain angles. These marks will assist in the detection of any fake number plates.

For further information on the new series contact the Department of Transport and Main Roads on 07 3066 1528.