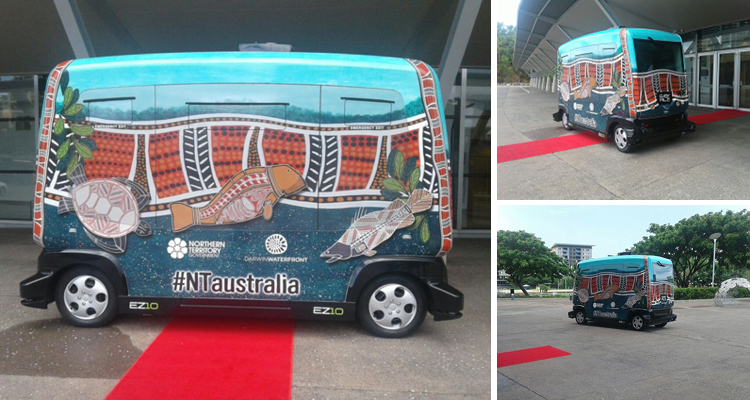 The Northern Territory Government has launched a six-month trial deployment of the EZ10 driverless shuttle at Darwin Waterfront commencing early this year.

The deployment will see the EZ10 driverless shuttle transporting visitors from the Waterfront precinct to Stokes Hill Wharf on a repeat loop.

The NT Government has taken a monumental step in establishing Darwin as Australia’s first fully operational transportation trial site for an autonomous passenger vehicle. This will be the first time an autonomous vehicle will be used as a transport solution in Australia.

“Autonomous transport technology is no longer science fiction – it’s here and we are leading the way,” Mr Gunner said.

“This project is something I have been interested in for a while now as we need to look towards these technologies as an alternative and niche way of efficiently and safely moving people around precincts and the CBD – and ultimately, the potential of linking the harbours between Stokes Hill and Cullen Bay.

“This trial will see the vehicle transport people between Stokes Hill Wharf and the Darwin Waterfront, and from there we can look towards future options in the Top End.”

The fully autonomous vehicle provides zero emissions when operating, is fully air-conditioned and capable of carrying up to 12 passengers at one time.  The vehicle can provide up to 12 hours of operation per charge.

The first stage of the trial will cost the NT Government approximately $150,000.

“The EZ10 vehicle attracted international and domestic notoriety during the Intelligent Transport System World Congress and there is now a dozen International and Australian clients actively seeking vehicles from EasyMile including universities, airports, precincts and shopping centres,” Mr Gunner said.