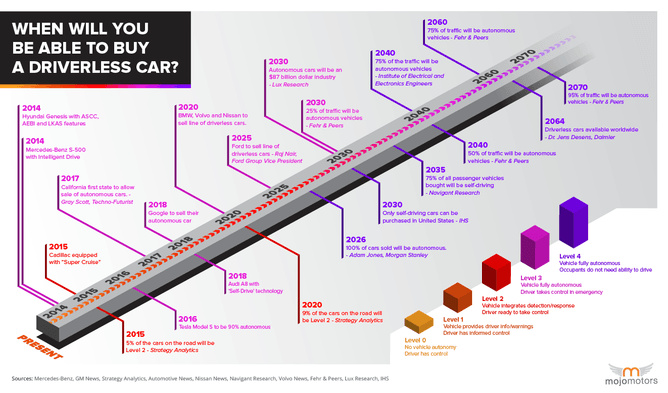 Driverless cars will change the way we think of car ownership

The transition to fully driverless cars is still several years away, but vehicle automation has already started to change the way we are thinking about transportation, and it is set to disrupt business models throughout the automotive industry.

Driverless cars are also likely to create new business opportunities and have a broad reach, touching companies and industries beyond the automotive industry and giving rise to a wide range of products and services.

The introduction of autonomous driving technology will be gradual. Mojomotors, Author provided

We currently have Uber developing a driverless vehicle, and Google advancing its driverless car and investigating a ridesharing model.

Meanwhile, Apple is reportedly gearing up to challenge Telsa in electric cars and Silicon Valley is extending its reach into the auto industry.

These developments signal the creation of an entirely new shared economy businesses that will tap into a new market that could see smart mobility seamlessly integrated in our lives.

Consider, for example, the opportunity to provide mobility as a service using shared on-demand driverless vehicle fleets. Research by Deloitte shows that car ownership is increasingly making less sense to many people, especially in urban areas.

Individuals are finding it difficult to justify tying up capital in an under-utilised asset that stays idle for 20 to 22 hours every day. Driverless on-demand shared vehicles provide a sensible option as a second car for many people and as the trend becomes more widespread, it may also begin to challenge the first car.

Results from a recent study by the International Transport Forum that modelled the impacts of shared driverless vehicle fleets for the city of Lisbon in Portugal demonstrates the impacts. It showed that the city’s mobility needs can be delivered with only 35% of vehicles during peak hours, when using shared driverless vehicles complementing high capacity rail. Over 24 hours, the city would need only 10% of the existing cars to meet its transportation needs.

The Lisbon study also found that while the overall volume of car travel would likely increase (because the vehicles will need to re-position after they drop off passengers), the driverless vehicles could still be turned into a major positive in the fight against air pollution if they were all-electric.

It also found that a shared self-driving fleet that replaces cars and buses is also likely to remove the need for all on-street parking, freeing an area equivalent to 210 soccer fields, or almost 20% of the total kerb-to-kerb street space.

Other studies have also shown that dynamic ridesharing using driverless vehicles will increase vehicle utilisation up to eight hours per day.

A recent study by McKinsey on disruptive technologies suggests that up to 90% of all accidents could be prevented by driverless vehicles. So why buy insurance if automation makes accidents far less likely?

“The truth is, if it’s a safer way of driving, it’s good for society and it’s bad for our insurance business,” the US business magnate Warren Buffet said recently when asked about the impact driverless vehicles may have on his GEICO car insurance subsidiary.

“Anything that cuts accidents by 30%, 40%, 50% would be wonderful, but we won’t be holding a party at our insurance company.”

Other studies have speculated that premiums could be reduced by 75%, especially if drivers are no longer required to get coverage, and liability is shifted from drivers to manufacturers and technology companies.

Under this scenario, insurers might move away from covering private customers from risk tied to ‘human error’ to covering manufacturers and mobility providers against technical failure.

A Rand Corporation report also predicts that drivers might end up covering themselves with health insurance instead of vehicle insurance.

Will driverless vehicles destroy the very idea of ownership?

Does all this mean car ownership is passé? In some ways, you may not own every facet of your driveless car anyway. Vehicle manufacturers are arguing that since they own the software that runs a connected vehicle, they also own the machine that runs that program.

In comments submitted to the US Copyright Office, vehicle manufacturers argue that purchasers are only licensing the product and it would be unsafe for them to modify the vehicle programming or even make a repair. The Copyright Office is currently holding a hearing on the issue. If it rules in favour of the manufacturers, it will set a precedent that can change the whole landscape of vehicle ownership.

Not everyone will be excited by this vision, and many would be sceptical and disagree that we are at the cusp of a transformation in mobility. Others still want to drive and not everyone is likely to want to rideshare on a daily basis. Many might also argue that better investment in public transport would achieve similar outcomes.

Whether you embrace or object to these scenarios, the reality is driverless vehicles are coming and they will have socio-economic impacts and other effects on our society – some good and some bad.

I see them, along with urban transport technologies, as having a role in delivering new mobility solutions as part of a holistic approach to improve road safety and promote low carbon mobility. The market will ultimately determine whether they can succeed.

This article was originally published on The Conversation. Read the original article.